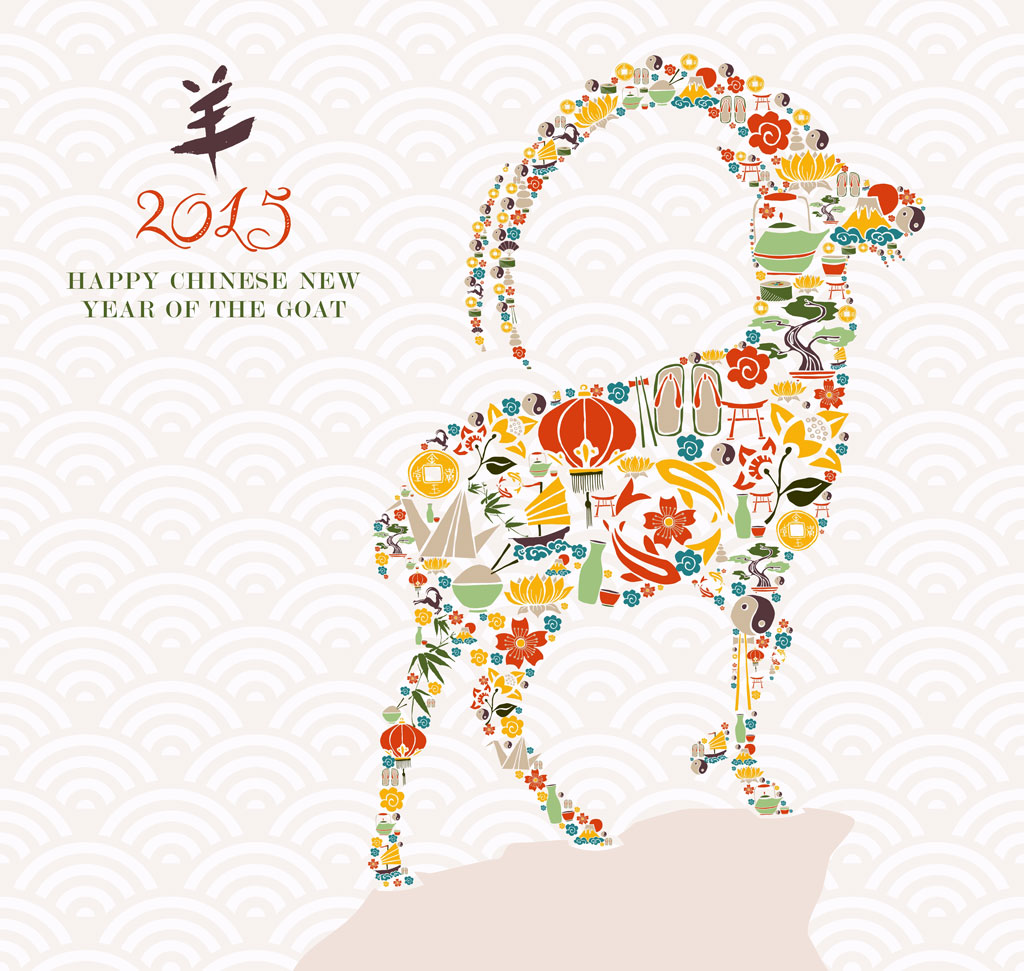 2015 is the Year of the Goat/Sheep. However, this year is not actually 2015. According to the Chinese calendar, it is the year 4713. The Chinese calendar dates back to 2637 B.C. It is said that the calendar was invented by the legendary emperor Huang Di, or the Yellow Emperor. Huang Di is also, incidentally, one of the originators of traditional Chinese medicine.
There are 12 different animals of the Chinese zodiac: rat, ox, tiger, rabbit, dragon, snake, horse, goat, monkey, rooster, dog, pig. Each animal has its own characteristics, and people born under a particular animal’s year are said to have that animal’s characteristics. The year of the goat is said to be a very auspicious year, bringing prosperity. The goat is thought to love peace and to be helpful and trusting, but also be “clinging” and resistant to change.
New Year’s festivities of 2015 officially begin on Thursday, February 19. The date of New Year’s Day is determined by the lunar calendar. People clean their homes before the new year begins, since it is considered to be bad luck to sweep away the good luck on the first two days of the new year. Families gather together for a large feast of traditional foods. There are many foods that are said to bring good luck, such as oranges, long noodles, pomelo, long leafy greens and beans, whole fish, chicken or duck, sweet desserts, and dumplings, and many more.
People also do a lot of shopping for the new year, buying new clothes, getting a new haircut, buying decorations for their homes, buying ingredients to make all of the foods for the feast. Door god images are placed on the door to keep out evil spirits. They also post phrases on the door frame which also help to keep out evil spirits. The fireworks and firecrackers are also used to drive away the evil.

Small red envelopes containing money are given by older people to young people and to children, with the hopes that the money will keep them healthy and give them a long life. Red colored or brightly colored clothing is worn to scare away the evil spirits. There are usually parades, including in the Chinese communities in the U.S. such as New York or San Francisco Chinatown. The traditional lion dance symbolizes the nian, a beast that lives under the sea or in the mountains, which would come out and attack people, particularly children. But with all of the New Year’s festivities and traditions to keep the evil away, the nian doesn’t stand a chance.