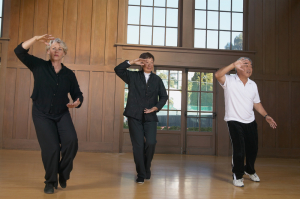 Tai Chi Chuan (or Tai Chi) is a Chinese martial art practiced for both its defensive and health benefits. The name Tai Chi Chuan translates as “supreme ultimate fist.” Its origins stem from the ancient Chinese philosophies of Taoism, Buddhism and Confucianism. Today, there are many styles of tai chi, some more vigorous than others, but the most common styles today are performed slowly. It is sometimes known as a form of moving meditation – the movements are done slowly and gently, with full attention and body awareness. This gentle movement can both prevent and alleviate physical problems, and can be done for the rest of your life, even in old age. You can start at any time, even if you aren’t in the best shape, although it is always best to check with your doctor before you begin.

Each movement in tai chi has its own, sometimes very poetic, name. Some examples are: white crane spreads its wings, or embrace the tiger and return to mountain. There are both long forms and short forms, each having a certain number of moves. For example, the long form may have 108 moves altogether, which are done in a particular, sequential order. There are also many styles, some have more quick movements, and some are slow and more meditative.

No matter what form you choose, they all have the benefit of unblocking and encouraging the proper flow of qi, or the body’s life-force energy. It gives the benefits of increased muscle strength, flexibility, balance, and to a lesser degree, aerobic conditioning. In China, it is believed that it can delay aging and prolong life. For this reason, it is very popular among the elderly. However, it can benefit people of any age, including children.

Tai chi can aid in the treatment of heart disease, high blood pressure, arthritis, digestive disorders, skin diseases, depression, cancer, and many other illnesses. Among the elderly, it is known to improve balance and prevent falls. According to the CDC, one out of three older adults (those aged 65 or older) falls each year. These falls may result in injuries, such as broken pelvic bones and traumatic brain injury, which can often lead to fatal complications in this age group. According to a study conducted by the Oregon Research Institute in 2005, “a three-times-per-week, 6-month tai chi program is effective in decreasing the number of falls, the risk for falling, and the fear of falling, and it improves functional balance and physical performance in physically inactive persons aged 70 years or older.”

Where can you find a tai chi class? Many martial arts schools also teach tai chi classes. Also, the YMCA and senior centers are good places to find classes, as well as adult education courses at a junior college. There are also many instructional videos available. This is a good option if there are no classes available in your area. However, in-person classes are best, so that the instructor can correct any mistakes and show correct body alignment. If done correctly, all tai chi movements should follow the movement of your hips, which is where the power and strength of the body comes from. This is a good way to find a reputable teacher, since this is very basic to all tai chi styles, and a reputable teacher should emphasize this technique.