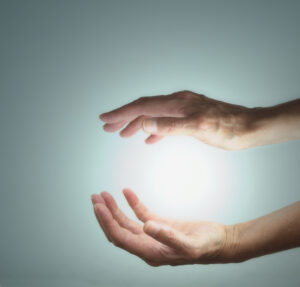 In Traditional Chinese Medicine (TCM), there are 4 vital substances of life: Qi (pronounced “chee”), Blood, Body Fluids, and Essence. This article will focus on the first one: Qi.

So, what is Qi? Qi is not easy to understand. There are no direct answers. In some ways it has to be understood with the intuitive mind, not with the rational or logical mind. Also, it is difficult to translate Qi from the Chinese language directly to English, as there is no direct equivalent in the English language or Western culture.

In simplest terms, Qi is energy or life-force. But it is much more than that.

This is the Chinese character for Qi:

The outer part of the character, 气, denotes cloudy vapors or steam. The part on the inside, 米, is the character for rice. So, its most elementary meaning is the vapors that are emitted when rice is cooked. This illustrates that there is both a material aspect and a non-material, more ethereal aspect. There is yet another concept that includes both material and non-material aspects that Westerners are more familiar with: Einstein’s theory of special relativity, E = mc 2 , in which Energy = mass times the speed of light squared. At the atomic level, matter is in a constant state of motion (energy).

In Chinese medical theory, Qi can be broken down into two fundamental aspects: a Yin aspect (material) and a Yang aspect (energy). Both are opposites, but cannot exist without the other. Yin is constantly turning into Yang, and Yang is constantly turning into Yin. When they are out of balance, one will consume the other, but always in a constant state of motion and relative balance. Because it is both matter and energy, everything in the universe is comprised of Qi. From a rock, to the ocean, to the light emitted from sun, to a human body, all are different manifestations of Qi.

In the human body, the meaning of Qi is applied to the functions of the organ systems, such as the metabolic function, and also to such substances as Blood, which is a very condensed form of Qi. Different types of Qi have different actions in the body: Qi activates growth and development, and promotes all types of functions in the body. Qi warms the body. Qi defends the body from external evil influences, such as a cold or a flu virus, much like the immune system. Qi keeps the blood flowing within the vessels, keeps the organs in place, promotes the metabolism of food, from digestion to excretion. Within the body, Qi moves in various directions: upward, downward, inward, outward, and spreading to all areas. This is the movement of Qi. The emotions and spirit are also a manifestation of Qi.

There are various ways to balance and harmonize your Qi energy. There are exercises such as Tai Chi Chuan or Qi Gong, that you can do yourself. Acupuncture and Chinese herbal medicine are great ways to balance your Qi. Healthy diet is another way that we can all balance our body’s systems. Qi is a concept that is both difficult and easy to understand, it is all around us and within us.

The post The Elusive, Difficult-but-Easy-to-Define Concept of Qi appeared first on Merry Clinic.