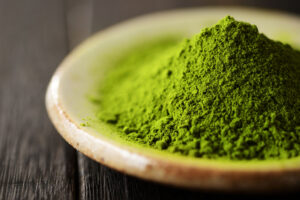 Tea, also known by its botanical name, camellia sinensis, is one of the most widely consumed beverages in the world. According to legend, in 2732 B.C. Emperor Shen Nong accidentally discovered tea when leaves from a wild tree blew into his pot of boiling water. He enjoyed the pleasant scent of the resulting brew and drank some. He also very much enjoyed the taste. Since he was an herbalist, he set out to discover the health benefits of tea.

Green tea has long been known in Asia for its health benefits. In fact, green tea is one of the medicinal herbs used in Traditional Chinese Medicine (TCM). It possesses both sweet and bitter flavors and has a cooling quality. Commonly known as lu cha in Chinese medicine, it is usually used in heat disorders. It is often combined with other herbs to enhance the cooling effect. Some herbs, such as chrysanthemum flowers, goji berries, mint, and licorice, make a very tasty beverage when combined with green tea. A famous Chinese herbal formula known as chuan xiong cha tiao san is great to alleviate headaches and contains green tea.
Tea is rich in antioxidants and boosts the immune system. It reduces inflammation, aids digestion, helps the body fight cancer, lowers cholesterol, can improve brain function, boosts the metabolism, kills bacteria in the mouth (improving dental health), may lower a person’s risk for type 2 diabetes and cardiovascular disease. The list of health benefits of green tea is almost endless.
In China, green tea is often drunk throughout the day like water. People often carry a glass container with loose tea leaves and keep adding hot water throughout the day. Tea is also frequently consumed more formally in China and also Japan, in the tea ceremony, as well as in social gatherings.
One unique use of tea is in cosmetics. Because tea is a very cooling herb, it helps to decrease redness and inflammation of the skin. And because of its high antioxidant content, it protects the skin from free radical damage, thus slowing down the aging process. The substance in green tea that makes it green – chlorophyll – also helps to remove or neutralize harmful toxins in the skin. Tea also makes a very soothing compress. Simply brew a cup of green tea, and store in the refrigerator. If you have any type of inflammatory skin condition, dip a cotton ball or clean cloth in the cold tea and apply to the red, inflamed skin area. It is very cool and soothing to the skin. You can also use the compress for dark circles or puffiness around the eyes.
Matcha, or finely ground powdered green tea, was originally from China, and was later made popular in Japan. Matcha powder is often added to cosmetics to minimize sun damage, brighten dark spots, even out skin tone, and promotes healthy collagen production.
Add a bit of green tea to your life. Your body and skin will thank you for it!